The Undiscussables: How to Address the Elephant in the Room 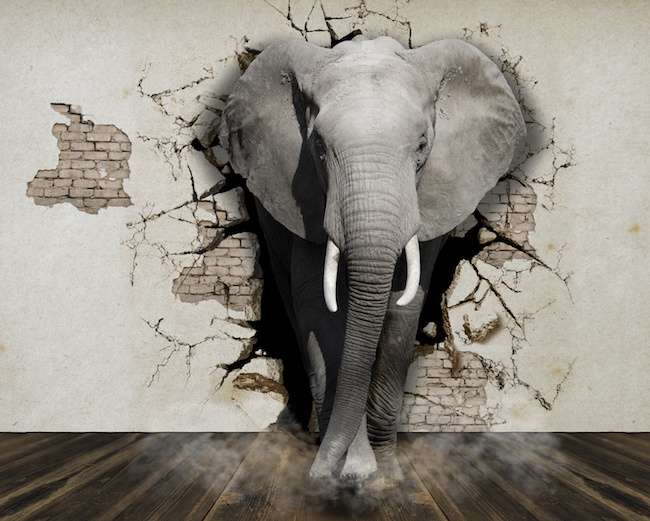 Every organization has elephants — a known problem or situation viewed as undiscussable. The elephant in the room is difficult to address for various reasons, including power structures and cultural issues.

To put it into context; employees don’t speak up because they perceive a lack of psychological safety within the organization.

No matter what the reason for avoiding conversations, a toolbox of skills can help make the undiscussable a bit more discussable. These tools can help you address the elephants in the room so that you can get back to the business of serving your patients, clients or customers.

When you’re in an undiscussable conflict, the tendency is to stay in your own head. You ruminate about what he or she might say and what outcome might happen if you bring up the sensitive subject. The first step is to get out of your head.

Here’s how: Set an appointment with the other person. Say something like, “Doug, I would like to schedule a 15 minute private appointment on Thursday at 2.” Now that you’ve made the commitment, you are one step toward a resolution.

When we ruminate, we start creating stories to fill in the gaps of the unknown. We judge the other person’s intention. For example when Kim rolls her eyes at you in a meeting, her boss builds a story about Kim’s intentions. When the behavior is ignored, an elephant emerges — an undiscussable. The story must die in favor of the facts.

Here’s how: Use curiosity to uncover motives. “Kim, I noticed that you just rolled your eyes when I brought up the new rotation. Walk me through what’s going on for you…” Then, breathe and allow Kim to deny, debate, or defend. It doesn’t matter what Kim does. The fact is you addressed the elephant. Instead of making up your own story about Kim’s behavior, you just made the undiscussable discussable and promoted accountability instead of avoidance.

Here’s where you get the chance to explain your experience about the situation. With this technique, you expose the other person to your feelings and perceptions — not to manipulate them, but to promote understanding. When you own the part you have played in the problem, you give a little grace to the other person, who can see you more as a partner than an adversary.

Here’s how: “Kim, when you roll your eyes, I feel disrespected. And by the way Kim, I’m sorry that I haven’t said something sooner, because that’s not fair to you. I don’t want to call this out in a meeting in front of everyone else. When you disagree, I’d prefer to hear your point of view rather than have to guess at what you feel.”

Kim may deny or defend, but I guarantee that because the elephant has been exposed, Kim’s behavior is likely to shift.

Here’s how: “Bobbi, my intention for meeting with you is to offer some coaching that will elevate your leadership.” Now Bobbi knows why you asked to meet with her and everything you say needs to be aligned with helping Bobbi. Even when the feedback stings a bit, people usually “feel” the positive intention and will take your message to heart.

These techniques are not meant to be a step-by-step blueprint. However, practicing these tools in combination with your own skills can assist you as you strive to bring the undiscussable into a positive dialogue.

Marlene Chism is a consultant, international speaker and the author of “Stop Workplace Drama” (Wiley 2011), “No-Drama Leadership” (Bibliomotion 2015) and “7 Ways to Stop Drama in Your Healthcare Practice” (Greenbranch 2018).  Download “The Bottom Line: How Executive Conversations Drive Results.” Connect with Chism via LinkedIn, Facebook and Twitter and at MarleneChism.com.