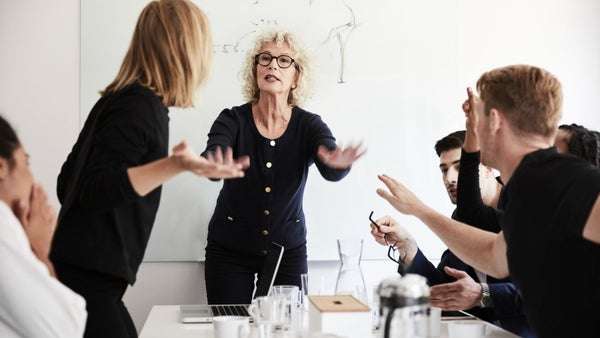 Unresolved conflict affects almost every area of business, from productivity, safety, turnover and absenteeism to the culture itself.

As a leader, you are going to be criticized and challenged. You’re going to be misunderstood, and you won’t feel like listening when these things happen.

The precise time when listening is your best defense, is when every fiber in your body wants to argue, defend, be right and educate the other person about how to think.

Here are two quick tips about how to listen radically.

First, take a deep breath and invite more conversation. Say, “I want to understand.” Or you can say “That’s interesting. I want to know more.” Become a witness to the conversation instead of a participant. It will feel like slow motion if you are doing it right.

But what if you are totally caught off guard?

Buy some time. Instead of coming up with your facts or research, say, “That’s an interesting viewpoint, but I’m surprised. Let’s schedule time to talk tomorrow at 2.” Teach yourself to expand space between stimulus and response.

Conflict is inevitable when you lead by assumption. Here are some examples of assumptions:

An assumption is simply an interpretation and is not grounded in fact.

“He doesn’t care about the culture” translates to “he wears flip-flops when the policy clearly states dress shoes.” You can’t make someone care about culture, but you can ask them to change their shoes. If they refuse, you can then determine next steps.

“He isn’t engaged” translates to “he has not signed up to work overtime.” Now that you have an observed behavior to work with, you can get curious or make a request about overtime, instead of assuming there’s no engagement. You might learn that he’s a widower taking care of small children or realize that he didn’t know the overtime opportunity existed. Naming the observable behavior opens a door for shared understanding instead of judgment.

As a leader, identifying and articulating the observable behavior shaves hours off of unproductive conversations that result from judgments and misunderstandings.

There’s nothing so perplexing to a manager than to have to course-correct a behavior that’s been going on for years. Sometimes the manager inherited the problem, and at other times, the disruptive behavior has been allowed and has become the standard.

For example, let’s say the entire team has been gathering at the coffee shop before work hours, but coffee time has leaked into productivity time, contributing to lateness and missed client calls.

Start by calling a meeting and setting the intention: “The intention of our meeting is to talk about productivity and how we can get on the same page regarding start times.”

Next, speak to the observed behaviors: “I’ve noticed a habit of clocking in, then gathering at the shop next door for coffee, and as a result there’s been some missed calls, and lowered productivity.

Next, take ownership: “I realize that I’m partly to blame. I was so pleased with your team camaraderie that I didn’t want to spoil anything. I realize now if I had spoken sooner, we would all be on the same page. I’m considering this a fresh start. It’s fine to go for coffee together. I hope you continue that, but you need to attend to personal business before clocking in. Meet any time you want, but if you are on the clock, you are expected to be ready for work. Does that make sense?”

Since you have “owned” part of the problem and offered a fresh start, most employees will not feel threatened, and they’ll agree.

Today, more than ever leaders need the skills to minimize unproductive conflicts that arise due to misinterpretations, lack of critical thinking and assumption making. Radical listening, naming the observable behavior, and owning the part you played keeps your focus and promotes better performance.